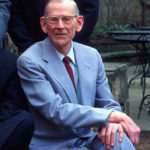 William F. Steuber was a University of Wisconsin graduate and the author of three books, eight educational motion pictures, and numerous news and feature articles. In 1992 he provided a generous endowment to the UW-Madison College of Engineering for the Steuber Prize for Excellence in Writing.

Born in 1904 in Prairie du Sac, William Steuber moved to Madison in 1911 and attended UW-Madison in the late 1920s. After interrupting his engineering studies to work in Canada as a surveyor, Mr. Steuber returned to Madison and resumed his school work, this time as an English major. While attending classes three days a week and working the other two as a draftsman and Dane County surveyor, Steuber also found time to cover local events using his 35 millimeter camera. He had the privilege of filming the honorary reception for Charles Lindbergh held at Camp Randall Stadium in 1927, and in that same year mounted the Wisconsin Capitol Building dome to film the regilding of the statue Wisconsin that sits atop the dome.

After graduating from UW in 1930, Mr. Steuber began working full-time as a draftsman and surveyor for Dane County. He joined the Highway Safety Promotion Department in 1937 and began producing brochures, pamphlets, and films on highway safety. He returned to an engineering role in the Wisconsin Division of Highways in 1939 and was promoted to Chief of Public Information in 1954 and to Assistant Highway Engineer in 1958. He retired in 1969 as the second ranking person in the Division of Highways.

While pursuing his career at the Division of Highways, Mr. Steuber wrote his three books. The first, Us, Incorporated, published in 1953, is the story of boyhood adventures in a small Midwestern city. His second — and most famous book — The Landlooker, details the events of the tragic Peshtigo Fire of 1871. It won awards from the Friends of American Writers and the American Association of State and Local History. Mr. Steuber’s third book is about the Menominee Indians 300 years before the white man settled in this area.

Mr. Steuber established this prize out of conviction that writing is important to engineers, proclaiming, “The combination of my engineering and writing skills gave me a tremendous advantage in my profession and work. Through this prize, I want to give UW engineering students the same opportunities and advantages I had because of these two skills.”